Many types of cell-surface receptors must oligomerize in a specific geometry to transmit signals from the extracellular environment to the interior of the cell.  Examples include the receptor tyrosine kinases, member of the tumor necrosis factor α and the activating immune receptors.  The extracellular and intracellular domains of these receptors are linked to a single-pass transmembrane (SPTM) α-helix.  Specific interactions between SPTM helices within the bilayer play an important role in determining receptor oligomer geometry and inducing signal transduction.  However, there is very little structural information on the quaternary structures formed by these SPTM helices.  We are pursuing strategies to elucidate these quaternary structures, and ultimately to gain greater understanding of the signal transduction process.

Membrane proteins are notoriously recalcitrant to crystallization. One strategy we have applied to try to obtain crystal structures of oligomeric SPTM helices is racemic crystallography which entails synthesizing the SPTM domains with the native L-amino acids as well its enantiomer, consisting of D-amino acids, and co-crystallizing them. Co-crystallization of peptide enantiomers allows for mirror and inversion symmetry to be accessed and thus these racemic mixtures can crystallize in chiral and centrosymmetric space groups (230 total) instead of the only 65 space groups available to chiral molecules. While this method has been successfully applied to many targets to acquire high resolution tertiary structures it is still not well understood if and in what cases this method can be applied in order to acquire native homochiral quaternary structures. Retention of the native homochiral quaternary structure in a racemic system is not guaranteed as heterochiral interactions could inhibit the homochiral quaternary contacts. To date we, in collaboration with Dr. Katrina Forest (UW-Madison, Department of Bacteriology), have obtained racemic structures of three membrane-active peptides: melittin (cytotoxic peptide)1, an analogue of magainin 2 (host defense peptide)2,3 and PSMα3 (cytotoxic peptide)4 (Figure 1, A-C). Based on crystallographic and NMR structural data of the homochiral counterparts of these three systems, we have concluded that the homochiral quaternary structures displayed in the racemic structures are biologically relevant. However racemic crystallization of a protein channel, influenza A M2 protein, SPTM domain resulted in a structure that displays a heterochiral coiled-coil structure5,6 instead of the native homo-tetrameric structure that has previously reported7 (Figure 1, D and E). We hope that future work in this field will help us understand what governs retention versus distortion of homochiral quaternary contacts in racemic crystallization. 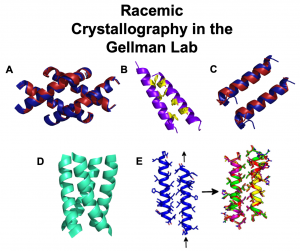 Inspired by the elucidation of a crystal structure of a “picodisc” consisting of two saposin A proteins (saposin = Sphingolipid Activator PrO[S]teIN) surrounding 40 LDAO detergent molecules (PDB 4DDJ)8 we have been working to discover more saposin A-detergent disc systems that are crystallizable and develop strategies for encapsulating SPTM helices in these discs. We hypothesize that protein-detergent systems will be more suitable for crystallization than lipoprotein systems because lipid-protein assemblies are kinetically trapped states in aqueous solution and this property can lead to heterogeneity in sample preparation whereas the detergent molecules can exchange in the disc complexes and therefore reach a thermodynamically favorable state. While the LDAO system appears to be a favorable target for our crystallization studies this system can only be formed in acidic conditions, pH = 4.8, and thus is not suited for encapsulation of TMDs at neutral pH (Figure 2). We have worked to identify several detergent molecules that can form saposin A-detergent discs at neutral pH and are hoping to use these systems to elucidate atomic resolution structures of SPTM domains via membrane protein reconstitution (Figure 2). 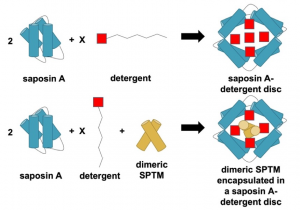 Figure 2. Artistic representation of the formation of saposin A-detergent discs and hypothetical encapsulation of SPTM helices.