Foldamers are oligomers that have a tendency to adopt a conformationally ordered state in solution. Our group has long been interested in exploring new kinds of foldamers and new kinds of building blocks to form them. We do this using a mixture of 𝛼-, β-, and even 𝜸-amino acids. Some residues are also cyclicly constrained to restrict conformational freedom and direct the formation of specific secondary structures. The different foldamer scaffolds we are able to create allow us to explore applications in catalysis and protein interactions. 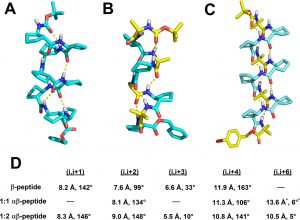 Crystal structures illustrating helical secondary structures adopted by ACPC-containing foldamers with different β residue content: (A) pure β (CSD: WELNOQ), (B) 1:1 α/β (CSD: OGAVAU), (C) 1:2 α/β (CSD: PUCDEX). Yellow and cyan represent carbon atoms in α and β residues, respectively. Blue represents nitrogen atoms, and red represents oxygen atoms. Hydrogen atoms other than those bound to nitrogen are omitted for clarity. Hydrogen bonds are depicted with dashed lines. (D) Three-dimensional relationships expected for the pair of side chain nitrogen atoms in foldamers containing two APC residues with varied sequential separation, based on the crystal structures shown in (A–C). Distances were measured between carbon-4 in the cyclopentane rings of appropriately spaced ACPC residues. For each ACPC residue, we defined a vector based on the positions of carbon-4 and carbon-2. The angle between these two vectors, when the structure is viewed along the helix axis, is given. Values refer to average distance or average angle based on all possible measurements in the given structure. *Only one possible i, i+6 diad can be measured in 1:1 α/β-peptide (B). This figure is reproduced from J. Am. Chem. Soc. 2018, 140, 12476.